Bali for yoga, NY for Rhythm, Sound, and Magic! 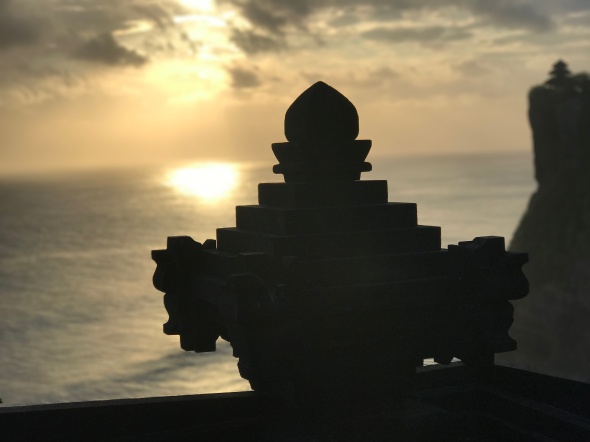 By the time I went to Japan, for this last trip in April-May of this year, I knew that I would be full-time with Blue Man in July.  So, of course my wife Yuki and I talked at length about what this means, how good it would be for us as a family, and how much of a change it would be for me, as far as my relationship to my time.

While I was part-time at Blue Man, I was almost completely in charge of how I used my time.  Blue Man would approach me, and ask when I was available for the coming month.  So, if I had other gigs, or wanted to take a trip, or whatever the reason, I could make myself ‘unavailable’ for said dates.  It allowed me the freedom to take month-long trips to Japan, or have out of town gigs with other bands whenever I wanted.

As a full-timer, I will be much more on their schedule.  Any time I want to take off will be very official, and there will be paperwork involved, as well as a limited amount of time off available.  This is just the reality of the situation.  I’m entering into my full time work with Blue Man very happily and gratefully, but also aware of what it means to how I use my time.

The truth is that my relationship to my time will be very different.   So, while I was in Japan, and talking over these things with Yuki, I mentioned how my Yoga teacher was leading a yoga retreat to Thailand very soon, and how much I would love to do it.  To my surprise, Yuki actually encouraged me to go for it!  So I immediately began to look into it, only to realize that it was happening just after I started full time, so I would be unable to go.

But I still had it in my mind-  it sure would be good to go and deepen my yoga practice before beginning my full time work, which will be physically demanding, and I will very much need to keep myself in top physical shape to ensure that I can do this for many years to come.

So I looked around for other possible yoga retreats, and thru some searching found a place called Samadi Bali that is a year round yoga shala that offers yoga/wellness retreats that include a room, breakfast/lunch, unlimited yoga, Balinese massages, a few other therapy sessions, and a consultation session to tailor the retreat to my needs.  I was also drawn to this place because of their emphasis on Ashtanga Yoga, which is the style that I’ve been practicing for over 2 years now, and has given me more benefit than all the years prior in which I had dabbled in different yoga styles.

While I was still in Japan, Blue Man Orlando was emailing me to ask what my availability was for June.  So I needed to book this trip, and work out all of the details quickly, which I managed to do.

I returned to the States, and began preparing to go to Bali…. In the meantime I received an email from Billy Martin’s (from the band Medeski, Martin, and Wood) mailing list, talking about his Rhythm, Sound, and Magic workshop/ week-long camp that would be happening just after I returned from Bali on June 16th.  I was booked to play at Kevin Maine’s CD release party on June 17th, where I would open with Hannah Harber & the Lionhearts, and close with Shak Nasti, and Blue Man had booked me for one show, on June 18th, then not again until June 24th.   The Rhythm Sound and Magic Camp was June 19th thru June 23rd.  It just might work.  It seemed that this window of opportunity had presented itself.  I had just dropped some pretty coin on booking the yoga retreat, but for years, I had seen the camps that Billy puts on, and had always wanted to go.  Should I do it?  Could I?  I knew that I wanted to…. Logistically it was a bit crazy, because the transportation to and from was pretty mysterious…. Just fly into NYC, and somehow get to the NYC Port Authority bus terminal, then there was a bus from there that would take me to Big Indian, NY, and somehow get picked up to get to this place called the Full Moon Resort.  Well, I hesitated, and milled it over in my mind, and, even though it wasn’t cheap, I decided to go for it.  I wasn’t sure when I’d have the opportunity to do this again, so I better do it while I can.

I can’t say how grateful I am to have had both experiences, and all with the loving support of my wonderful, beautiful wife of 17 years.  Only my life partner who’s been through so many years and so many life experiences with me would understand me enough to say, “Go!  Do it!”

At a campfire bond with my Samba-Batucada-Low-End-partner-in-rhythm Josh (whom I met at the rhythm camp), summed it up with this:  “When your girl tells you to go to drum camp, YOU GO TO F###IN DRUM CAMP!”

So far, I haven’t posted anything from either experience.  I made a conscious effort to experience both things as much as possible, and not to get tangled up in posting to social media.  I knew my life would slow down a bit once I returned, and before full time work started up in July, so I figured I’d do it all then (which is now).

So, for the next few weeks, you’ll be seeing me post pictures and videos from Bali, Indonesia, and then from Big Indian, NY.  But, I’m not in either place.  I’m here in Orlando, posting some not-so-insta Instagram posts-  but, at least for me, it was well worth the wait.

While I was on tour with the Blue Man Group’s North American Tour, I got to see a lot of the states, and I realized how much I like graffiti.  But not just any graffiti-  not some kid with his first can of spray paint writing something lewd on a wall, but the really amazing, and artistic stuff.  The kind that, to me, improves the visual appeal of the area.  The kind that makes you think, or just catches your attention in a good way.  In my own mind, I kind of refer to it as “Street Art.”  Some of these artists do some amazing things with cans of spray paint. END_OF_DOCUMENT_TOKEN_TO_BE_REPLACED

An EPIC Summer- 4 Months in the Mediterranean – Port 1: Barcelona

This is the first post of a bunch about my adventures in Europe.

I had the privilege to be the drummer for the Blue Man Group aboard Norwegian Cruise Line’s EPIC ship, where we cruised through the Mediterranean for four months.  The EPIC is basically a huge floating city, complete with enough cabins for 5,000 guests, 1,700 crew, 22 restaurants, a pool deck, water slides, a sports deck, rock wall, outdoor mega-screen club/bar/sundeck, a spa with wet and dry saunas and hydrotherapy pool, passenger and crew gyms, outdoor jogging track, comedy club, Cirque tent, casino, many bars, bowling, art gallery, Crew Bar, and of course, the EPIC theater, where Legends in Concert would perform Tuesday thru Thursday, and the Blue Man Group would perform Friday thru Monday.  There was no shortage of fun to be had on the ship….

But this post is about what we did in port.  We sailed the same route each week:  Sunday was Barcelona, Spain;  Monday was at sea the entire day;  Tuesday was Naples, Italy;  Wednesday was Civitaveccia, Italy:  the port nearest to Rome;  Thursday was Livorno, close to Florence, Italy;  Friday was Cannes, France;  and Saturday was Palma, Majorca, an island just off of Spain.  Then it was back to Barcelona on Sunday to do it all over again.  Barcelona was where the whole adventure began for our cast.  We were all flown from our respective home cities to Barcelona where we had one night, followed by a 6am call the next morning to catch the bus into port, where we would first board the EPIC.

END_OF_DOCUMENT_TOKEN_TO_BE_REPLACED

When this whole thing started, I kept thinking of it as Zombie Meditation Camp.  Everyone wakes quietly at 4am, while it’s still basically night out, and gets ready in their own way.  Some shower, some stay in bed till the last second, some brush teeth, but the wake up call is obviously not easy for most of us.  Then the hooded zombies silently, and in single file, shuffle our way to the meditation hall.  In this darkened hall, we all have 24″ square cloth-covered foam meditation cushions arranged neatly in about 12 rows front to back with 3 per row on the left for the men, and 4 on the right for the women.  Our names are printed on pieces of paper where our assigned position will be for the next 10 days.  We receive recorded instructions through a speaker system by the creator of this particular course, S.N. Goenka.  Most meditation sessions begin with a recording of Goenka chanting the words of Buddha in the old language of India.  He has a very low, resonant voice, and again, it’s more chanting than it is singing, so at times the sounds are unfamiliar, (“aaaaahhh, at the back of the throat”), and some of them almost very guttural.  I begin to hear words that sound like english words pop out of the chanting….   “naked,” “Johnny say a hey hey,” some Japanese words, “manko (vagina),” “ato wa (next),” “anata (you)”,    and a couple of things sound like Ewok speak: “Gu Du Gu Du,”  “wally wally, jup jup”.

END_OF_DOCUMENT_TOKEN_TO_BE_REPLACED

Meditation Retreat Pt. 1- getting there…

Here I am, on the other side…

It’s 2:21, in the Philadelphia Airport.  My flight leaves at 6pm for Boise, Idaho, where I’ll spend the next 6 days with my parents.

The better part of 2 weeks ago, I sat in a different airport, a different man.  I’ve now experienced things that have changed how I view the world, and my relationship to it, and it’s all good.

END_OF_DOCUMENT_TOKEN_TO_BE_REPLACED

I’m sitting in the Savannah, GA airport.  The time is 5:11am.  I haven’t slept.  Stories of child murders, Boston bombings, and other stories in today’s horrific news resonate through the nearly empty terminal.  Last night I sent one suitcase, and my trusty ‘tour’ bike home with Wes Day-  one of the blue men here on tour, who was driving back to Orlando, and in fact is probably already there.  I’m headed somewhere different…

END_OF_DOCUMENT_TOKEN_TO_BE_REPLACED

Made a cold trip down to icy Lake Erie while in Cleveland. I enjoyed seeing the Geese walking on the ice, and was really surprised by the beauty of the ice formations out on the lake. After losing my gloves in Buffalo, my hands were frozen numb, but I was there at just the right time, and caught an amazing sunset. 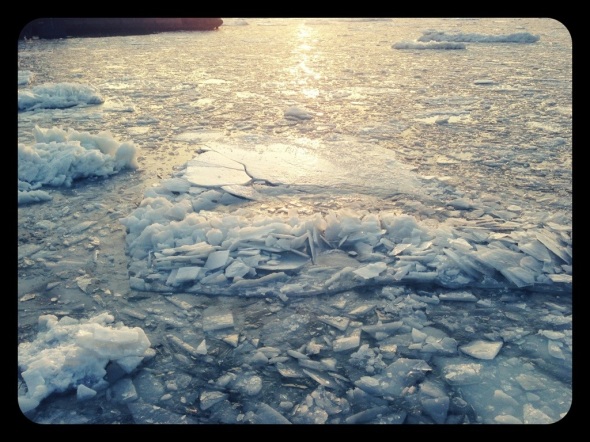